Avon Products: The End Is Near For This Stock

Stock price is at a high point and now matches Natura’s acquisition value.

Avon stock is expected to cease trading next quarter.

Avon Products, Inc. (NYSE:AVP) was founded in 1886. The company has been sold to Natura, a company in Brazil, and Avon's stock will soon cease trading. My recommendation is to sell now while the stock is at a high point, or use it as an entry point into Natura when Avon stock is exchanged for Natura stock.

Avon Products is a direct sales beauty business that, on one hand, many are at least somewhat familiar with. On the other hand, some may be surprised to learn Avon no longer does business in the United States and Canada. Its primary markets include Brazil and Russia.

In March 2016, the company sold its North American operations to a privately held company operating as New Avon, LLC.

Avon originally kept a 20 percent stake in New Avon, but sold its ownership in the third quarter of 2019.

Merger With Natura: Status and What Shareholders Get

On March 22, 2019, Avon confirmed it was negotiating a potential sale to Natura. Two months later, on May 22, 2019, the company announced it had entered into an agreement to be acquired via a merger with Natura Cosméticos S.A., a Brazilian corporation.

After the merger is completed, Avon and Natura Cosméticos will each become wholly-owned subsidiaries of a new Brazilian company called Natura &Co Holding.

Upon completion of the merger, Avon common stock will cease to be traded on the New York Stock Exchange.

On November 13, 2019, Avon stockholders approved the merger plan. After the merger is complete, Avon shareholders will own approximately 24 percent of Natura &Co Holding.

Natura is reporting that its shareholders have approved the deal, and its Avon acquisition is on track to be completed the first quarter of 2020. Avon and Natura have agreed to complete the merger no later than July 22, 2020.

The conversion rate from the Brazilian Real to the US Dollar is about 1 Real = 25 US cents.

On March 21st, the day before Avon confirmed buyout talks with Natura, Avon stock closed at $2.78 and has since steadily INCREASED and almost doubled in value to match the Natura acquisition value.

Natura stock closed at 22.50 on March 21st. Since the confirmation of the acquisition, the stock has increased about 65 percent.

During the most recent earnings call on October 31st, Avon management referred to:

In my opinion, this is mainly a process of going through regulatory requirements before the merger and has little impact on the stock price.

If you want Avon to be your entryway into obtaining Natura stock and the international beauty market then buy Avon, or invest in Natura directly.

Otherwise, I would sell since Natura is at a high value mark and the Avon stock price is matching the Natura valuation. 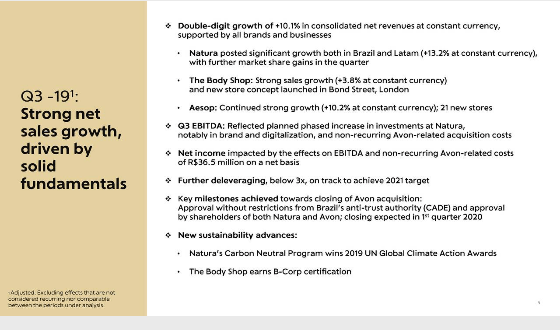 This is not an article about Natura but Avon Products. I have not been generally impressed by direct sales as a revenue model, with Avon being an example of a company in distress. Natura has other stand-alone businesses online and in retail storefronts, The Body Shop and Aesop, and will likely seek to cost effectively leverage its new Avon products across its portfolio.

But, given the current stock valuation, if I were a long-term Avon shareholder, I would be comparing the tax consequences of selling before or after the year end. For a new investor, I would not buy into Avon seeking last minute profits before the merger is complete, but as an entryway into Natura.