Nu Skin Enterprises: A Lot Going For It

Nu Skin Enterprises: A Lot Going For It

NUS is attractively exposed to China and the ASEAN regions where growth prospects look more promising.

NUS thrust towards digital sales is working well for them (80% of sales are online) and has been a key reason for the recent spike in the Q2 guidance.

Technically, the stock is looking strong on both the monthly and daily time frame.

I do much more than just articles at The Lead-Lag Report: Members get access to model portfolios, regular updates, a chat room, and more. Get started today »

Be good to your skin. You will wear it every day for the rest of your life. - Renee

Nu Skin Enterprises, Inc. (NUS) is a company involved in the business of developing and distributing premium-quality beauty and wellness solutions in more than 50 markets across the world. NUS’s group revenue is primarily generated from three brands: a) Nu Skin - their beauty and personal care brand, b) Pharmanex - their nutritional products brand, and c) ageLOC – their anti-aging brand. In addition to their core Nu Skin business, the company also pursues strategic investments in areas such as personal care & nutritional product manufacturing and indoor-growing technologies (also known as controlled-environment agriculture). Here are some of the reasons why investors may consider an investment in this stock. 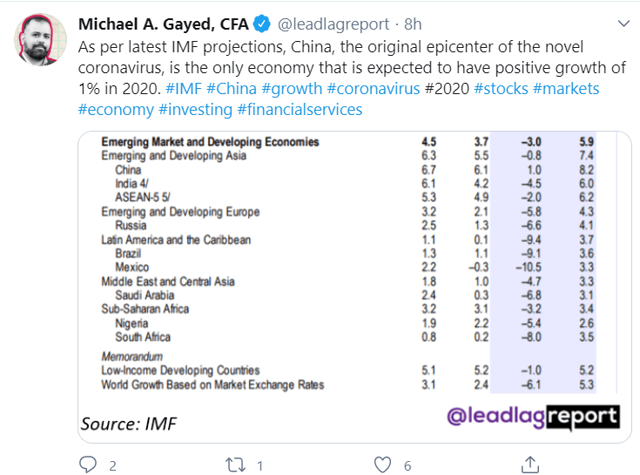 Supporters of the Lead-Lag report will note that I had recently shared the IMF’s regional growth projections for the next couple of years. Whilst China remains the only notable exception in the 2020 table, Emerging Asia and most notably the ASEAN region isn’t too far behind, with an expected decline of only -2%. Crucially, in the next fiscal both these regions are expected to lead the recovery in global growth, with China expected to grow at more than 8%, whilst the ASEAN countries are expected to grow at 6.2%. 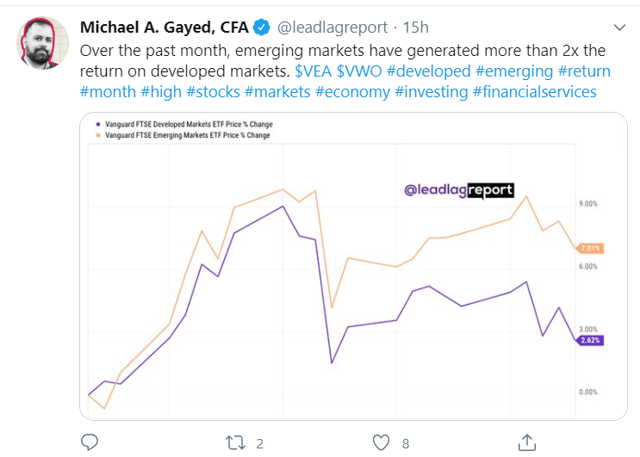 Investors have been attempting to price in these relatively superior growth projections, and this has been reflected in the market prices of Vanguard’s Chinese and ASEAN dominated Emerging Markets ETF (VWO), which has outperformed its comparable Developed Markets ETF (VEA) quite handsomely over the last month. 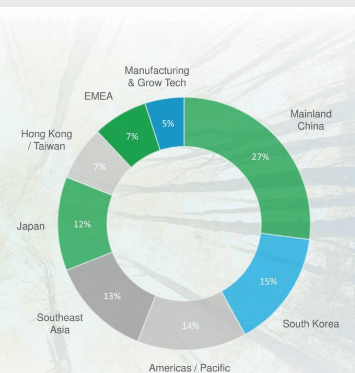 NUS offers investors an attractive proxy to these markets as it is predominantly exposed to the premium beauty and wellness market of East Asia and southeast Asia, most notably the Chinese region which accounts for 30% of annual revenue. 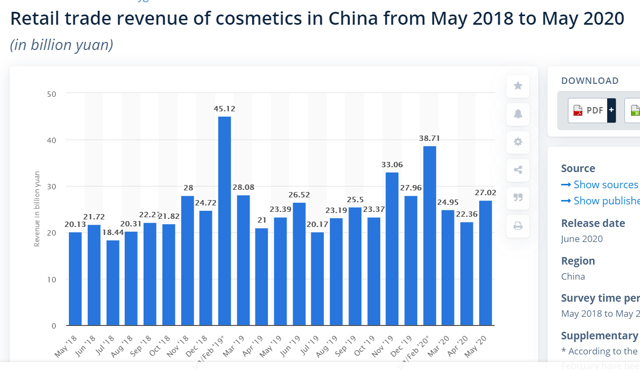 Over the last few weeks, I’ve been left quite heartened with some of the improving Chinese macro data that impacts NUS. Retail sales of cosmetics which had fallen to 22.3 billion yuan in April rebounded in May to the 27 billion yuan plus levels, higher than the level seen last year at 23 billion yuan and well in line with the average seen across most of last year. Then last week, the CEO of beauty giant – L’Oreal (OTCPK:LRLCF) mentioned that “business in China was back to a very strong growth.” He also mentioned that consumers were also returning to elsewhere in regions such as Europe. China’s Caixin General Manufacturing PMI in June also reached its highest level in six months hitting 51.2 and beating Street estimates of 50.5.

Merits of the NUS operating model and increased digitization

There are also certain fundamental things that I like about their business model that will likely serve them well in the current environment. Firstly, it is important to note that they sell their products primarily through the person-to-person direct sales channel. Their sales network consists of individuals who not only buy and use their products but also resell, and also recruit, train, and develop new sellers. Over the last few years, the company has been making a concerted effort to go more digital and help these sales agents work remotely.

Over the last 12 months, even before the pandemic struck, in-person meetings had been reduced and sales were being driven mainly from the online channel (80% of sales volume now comes via online sales). I think in the current environment they are well-positioned to recruit a large number of low-cost digital sales agents the world over, who will be more open at looking for supplemental income opportunities online.

Then in Q4-2018 they also hired a new Chief Transformation Officer to deepen their digital initiatives and are now looking to introduce a new digital tool in Q4 - VERA that will use AI and machine learning to optimize product recommendations. Their training programs too are mostly now run digitally. As mentioned in the introductory section, over the years, the company also has made strategic investments in personal care & nutritional product manufacturing and this has helped them manage supply-side bottlenecks better than most of their peers.

Solid Q1 results and positive outlook for the year

In Q1, the company beat Street estimates with revenue coming in at $518m, a beat of c.8%. What was impressive was that this beat happened despite a 2% currency headwind. One must also consider the fact that historically, Q1 has been a seasonally weak quarter, mainly on account of the Chinese New Year. Despite adverse sentiment across the consumer markets in Q1, on account of both the New Year and the pandemic, the company was able to mitigate any potential inventory pressure, with inventories declining by $18 million. The company also did well to rein in its G&A expense by c.$9m and they believe they do think they can continue to make similar adjustments on this operating cost base going forward.

That said, the primary driver for the recent surge in the stock price was the uplift in the company's Q2 revenue guidance (results due to be announced in the first week of August), to $603-$608m, which was upgraded from the previous guidance by c. 13% and above Street estimates by c.12%. Drivers for the upgrade were a strength in the Americas and European region, driven mainly by online sales which accounted for 80% of the volume.

I think they can carry this momentum towards the end of the year and beyond as in Q4 they have a couple of product launches lined up in both the wellness and nutrition segment (ageLOC Boost and Nutricentials), and in H1-21, they have a few follow-up product launches too. Traditionally, new product launches have been instrumental in pushing through sales momentum. NUS is also one of the few companies that I know that has not taken off their FY guidance; this visibility during uncertain times is a sign of their confidence. 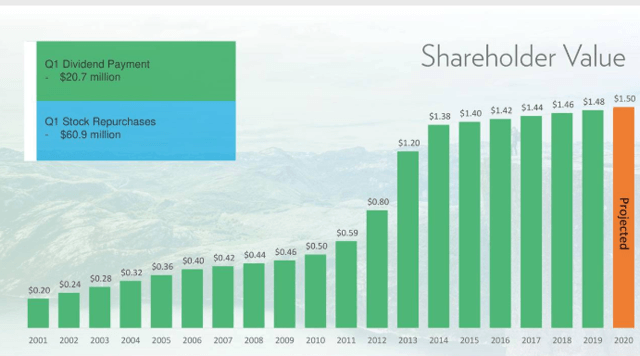 Another reason why I like the NUS story is that traditionally, it's been a consistent source of shareholder returns by way of dividends and share repurchases. On the dividend front, regardless of business prospects, the company has increased the dividend every year for the last 19 years! There are not too many companies that can offer such consistency on dividends for such a long period. Even in the recently concluded quarter when a lot of companies had canceled the dividends, NUS made a dividend payout of more than $20 million.

At the current share price, you’re getting an impressive forward dividend yield of more than 3.5 %. In addition to that, they’ve also been running a share repurchase plan since August 2018 with an authorization limit of up to $500m. At the end of last year, they had utilized about $30 million of that and in Q1 they did another $60 million of share repurchases.

Enticing technical movements on the charts 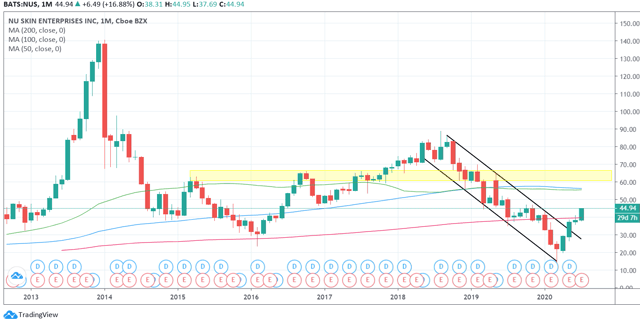 I’ve been left enthused by the recent price imprints of the NUS stock. On the monthly chart, after making an intermediate peak of close to the $90 levels in Aug 2018, the stock had since been correcting via a broad descending channel for close to two years. This culminated with a pin bar candle seen in March with strong buying emerging at the sub $20 levels. Since then, the price action has been rather strong, with the stock breaking out of the upper boundary of the multi-year descending channel in May and carrying on this momentum. Looking ahead, there doesn’t seem to be any strong supply zones until the $60 levels which should augment the recent bullish sentiment. 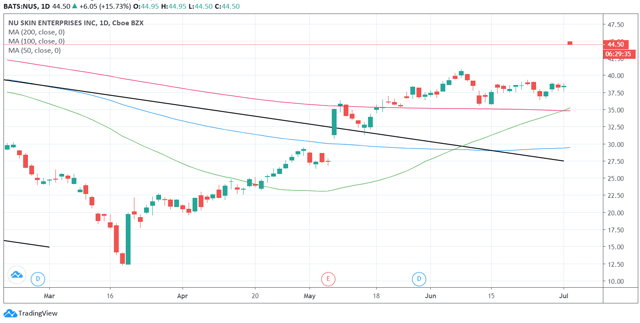 If you enlarge the chart and look at it from a smaller time frame such as the daily chart, one can see a lot of bullish signs. After taking out the psychologically crucial 200DMA in mid-May, the stock has since demonstrated strength by consolidating above this. Supplementing this, we have just recently witnessed the bullish Golden Cross pattern where the short-term 50DMA overtook the long-term 200DMA implying strong bullish momentum for the stock.

87% of NUS’s group sales are from outside the US making it rather susceptible to the USD’s appreciation. This has proven to be a spoilsport in the recent past. Last year, FX negatively impacted annual sales by 3%, they’ve seen this trend continue into Q1 with an FX headwind of 2% and they’re now guiding to a c.2-3% negative impact from FX for FY20 as a whole.

Another lingering risk that they will likely have to deal with is the regulatory encumbrances in some of their markets, most notably China which is complex and continues to evolve. In China, direct selling and anti-pyramiding regulations contain various restrictions that are inconsistent and vary across states and provinces. Besides last year, the Chinese government had also taken steps to restrict in-person meetings for sales of products. Ironically, this may have proved to be a blessing in disguise for NUS as on account of this, they were able to get ahead of the coronavirus curve and move towards a more digitized form of selling.

Sometimes, you might not realize your biggest portfolio risks until it’s too late.

That’s why it’s important to pay attention to the right market data, analysis, and insights on a daily basis. Being a passive investor puts you at unnecessary risk. When you stay informed on key signals and indicators, you'll take control of your financial future.

My award-winning market research gives you everything you need to know each day, so you can be ready to act when it matters most.

Disclosure: I/we have no positions in any stocks mentioned, and no plans to initiate any positions within the next 72 hours. I wrote this article myself, and it expresses my own opinions. I am not receiving compensation for it (other than from Seeking Alpha). I have no business relationship with any company whose stock is mentioned in this article.

Additional disclosure: This writing is for informational purposes only and Lead-Lag Publishing, LLC undertakes no obligation to update this article even if the opinions expressed change. It does not constitute an offer to sell, a solicitation to buy, or a recommendation regarding any securities transaction. It also does not offer to provide advisory or other services in any jurisdiction. The information contained in this writing should not be construed as financial or investment advice on any subject matter. Lead-Lag Publishing, LLC expressly disclaims all liability in respect to actions taken based on any or all of the information on this writing.